.. and what I associate with it

During the summer holidays 2007 I was with my family in Austria at lake Millstatt. In the sky were these colorful paraglider. My heart had always been attached to aviation and so on June 23, 2007 I had Gerhard Fischer in Treffling, flight school Fly Carinthia , made my first hops. No paragliding passager flight, immediately fly yourself! I never regretted it … 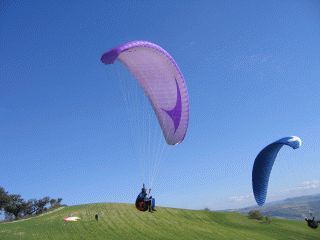 A Nova Pheron L, built in 2002, was my first glider. The “Purple Cow” can be seen in the picture. I will always remember my first screen and the idiot hill. On 06/29/2007 I received the training confirmation of the ÖAC. What was I proud of.

Immediately in the next autumn holidays back to Lake Millstatt. On 23/09/2007 my glider climbed for the first time in the sky. My first thermals! I tried to stay in there somehow, but had no idea how. I was in the air for 25 minutes. A felt eternity!

I wanted to fly! Not only on vacation, actually always. I searched the DHV homepage and found a flight school not far away. On 02/24/2008 then my first start at the winch. With Markus Berghaus and his flight school active-zone . I do not only have a great flight instructor I also found a flying friend.

After further high-altitude flights in Greifenburg and a theoretical education with Markus – I was one of the first students of Markus and we still learned at his family’s dining table – I made by Thomas Weigel at 06/02/2008 my A-Exam.

Is my flying home. Somehow it does not always go there. The aviation camp , the bathing lake, the Emberger Alm and the elongated Drautal (Web Cam of Emberger Alm ) are for me the epitome of flying in the Alps. Although I did my first flights from the Tschirnock, later only from the Goldeck and the Emberger. But the training with the flying school active-zone by Markus Berghaus there was influential. If the weather fits, I could always be there.

During the autumn holidays of 2008, I was in the Arntal with the flight school active-zone . I made flights in the high mountains (for example Speikboden) – led by the sports lecturer of the DHV, Ralf Schlöffel, who then supported Markus in the care of us – and thus my first thermal experiences. Incidentally, it was a 10 km long distance flight from it. We had a lot of fun with Ralf, not only when flying …
My first steep spiral (overland) was the culmination of a beautiful week of flying in the Arntal.

In February 2009 it will be the first time to Andalusia. It was quite easy with sports luggage – even with budget airlines – to fly. From Weeze to Marbella flown, two rental cars and then we are mercilessly climbed the mountains with the car. An Gerado website and tips for the best flying area are available for free. Morning breakfast in the market square, leisurely flying on the mountain Sierra de Lijar and then in the evening in the JJ-bar with flyers from all over Europe about flying in general, the weather and the best beer in Algo to chat. Actually it does not get better – if the weather is right!

In 2010 we were back in Algodonales. This week it rained continuously for 5 days. In the only significant rain break, we flew at El Bosque, despite approaching rain front (we idiots). The result was a rescue descent, a pilot who was washed down from the front over the mountain in the Lee and only came down with good luck unharmed, as well as the rest of the planes, which in the pouring rain, sometimes had to land with accelerator / could / could …

In 2009, I also made my B-ticket and flew a lot on the winds. Lowland flying is something special. No dangers as in the wind systems of the mountains, but it is always hard again to make the leap from the winds to the thermals. Once you have fought on the base, it is to take any thermals. Has something, but is very different than the Alps.

There is not much more to say than: The Mecca of paragliders! Overnight at GardenRelais right on the landing pad. Always ranks of aviators in the air and in the pubs. Aperol Spritz for, the sorbet in the L’Antica Abbazia and the Poli from the Grappa Museum on the Ponte degli Alpini. With that, all has been said!

Unfortunately, after not being able to fly much in 2010, I am on safety training at Chris Ghost re-entered Lake Garda. We had great days, a great group of airmen and we learned a lot. It was a very intense experience for me, as I felt limits myself, Chris has opened these borders for me and how it all looks in the video analysis.

On 13.03.2013 I passed the practical entrance test for passenger authorization in Bassano. Peter Nietsche was a tough examiner and on my test flight he flew right behind me. Nothing was hidden from his critical eyes. Peter is also a good teacher, so I learned a lot again this week.
Thomas Weigel I took my therotic exam on 01.07.2013 in his nice house in Wetter an der Ruhr. Since shortly before some laws in Austria on the subject of insurance protection for passengers have been changed, I have only passed with the maximum allowable number of incorrect answers. That was close …
Then I collected flights at the wind. This is hard to find a passenger with A-bill, the 40 flights as a tandem weight. But I know there is a very nice Guido K. and even drove with me to Greifenburg so I could also do my Hangstartberechnung.
Jochen Henrich is planning a week later in Greifenburg, Friday 18.04.2014 the big rain, my passenger’s permission taken off. I was so excited that I have given my passenger Guido a Passiergiereinweisung longer than our flight from the water heater.
On May 08, 2014 my new aviation license with passenger authorization arrived.
Now only the weather for my first flight with wife and children has to fit.

In 2014, I joined the flight school active-zone in Freckenhorst. At the time, as far as I know, Markus Berghaus was the only authorized instructor for stage drag.
It was in the spring, lots of wind and no thermals. Still it was quite fun to fly the maximum number of steps in a tow …
The challenge was, maximum extension length of the wind and maximum Ausklinghöhe 😉

I made 2017 with Sven Traute ( Landewiese ) in Höxter.
Paramotor flying with internal combustion engine is not really my thing, just too rappelig.
But maybe it will be something with an electric drive, but I dream of it.

In 2018 they persuaded me in the club to make the winch driver license. The good 60 tows, always with a instructor, but then withdraw.
Is actually a very relaxed affair, if the right people drag. As you sit under the umbrella and looks at the flight operations from 1km away at …
In 2018, we had the most tows in our Diomedea club. Nearly 1,000 in one season, one was that one summer and then I quickly got my tows together.